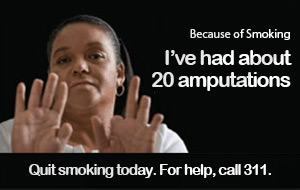 Did you notice this poster in the subway? Apparently it is part of some sort of anti-smoking campaign. It features a lady from Bronx with the caption "I've had about 20 amputations."

Alright, that is pretty sad, but the question is what are they implying with this poster? "If you smoke, it's a matter of time before you can say this little piggy..." I'm quite sure smoking does not equal loss of fingers, otherwise most of the people in Europe would not be able to flip you off as often as they do.

Another thing that is obvious is that they're trying to scare people away from smoking, which I also don't care much about, since I never smoked in my life... but what bothers me the most is the word "about".

How much is about 20 amputations? Is it 18? That would be my guess - 18, but wouldn't somebody know how many it was? At least the doctors should know, right? It's like 50 Cents saying I got shot about 10 times. Doesn't that jerk your chain?

Also, another thing I want to know is - did she quit smoking? And if so, was it in between the amputations? Common, I want the full story. Maybe I'm having a case of Mondays, but this poster is just pissing me off.