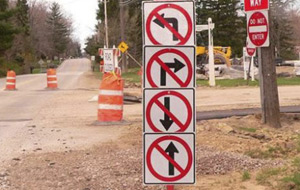 Did you notice how helpful New Yorkers can be? One thing about New Yorkers, a phenomenon if you may, is that most of New Yorkers will always tell you which way to go! If you are lost, and don't know which way Madison Avenue is, just stop and ask somebody. I bet that you'll get an answer right away. It may not be the right answer though. As a matter of fact you might as well toss a coin. The odds are usually fifty-fifty on both.

So yes, many times I have asked people for directions and got mislead into going the wrong way. Once or twice I gave the wrong directions to somebody (not on purpose of course), but today was slightly different. Due to the snow storm in New York I got on the wrong train, and ended up on the wrong side of tracks, literally. Luckily though, as soon as I got off the train I saw "my bus" (hint: notice "my bus" is in quotes).

A guy walked up to the group of the people already standing there, ten of us, give or take, and asked if this bus was going to Ocean Parkway. Silence. Nobody was answering. I looked at the guy and said "Yes, it is". I noticed how people were staring at me, but nobody said a darn thing. Turns out that it was blind leading the blind. I was wrong. It was the wrong bus. Both the guy and I went in the wrong direction.

After I realized my mistake, we both got off the bus and waited in blistering cold for half an hour. So maybe I'm having a case of Mondays, but I think that this was just plain WRONG!