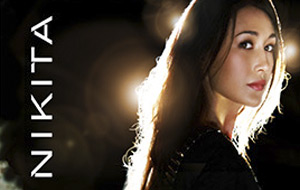 Do you watch Nikita? Have you noticed how often they say the word "Division" in each episode? I'd say it's anywhere between 4 times and a billion times
per episode. For this purpose I came up with a drinking game. Rules are simple:

Okay now, when I say "shot", I don't mean alcohol - nobody would last a full hour like that. I recommend H2O or O.J.