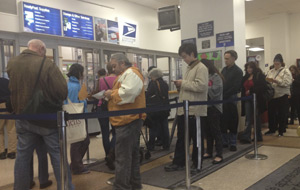 Did you notice that in the post office every day is a Monday? To those who are fast enough to spot that today is not really Monday - Yes, today is actually a Thursday, but I've gone to the post office, and they apparently did not know this.

Only once was I actually involved in a post office drama. There were about 15 people on the line. In front of me was a lady who was being cursed out by another woman in front of her. All of this over absolutely nothing! I can't say what was said, because this blog article would be way past the "explicit" label.

When she was done I said quietly "Wow, that's harsh." At that time the lady in front of me (that's right, the one who was cursed out) turns around and spits "AND YOU'RE FULL OF SHIT TOO!"

So here's my idea. Let's not call it GOING POSTAL anymore. Let's just say that they're having a case of Mondays. (Even if it's on a Thursday).