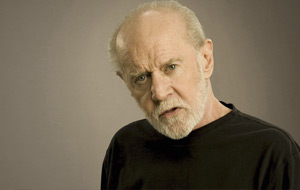 Did you know that this blog was originally dedicated to George Carlin? I believe that he is the master of complaints. He could complain about everything and everyone.

"You know what I never liked? The high-five. I consider it lame white-boy shit. When a guy raises his arm to give me a high-five, you know what I do? Stab him in the arm"
or
"If the reason for climbing Mt. Everest is that it's hard to do, why does everyone go up the easy side?"

Carlin died yesterday at age of 71. He'll be remembered by many and I sure hope that he gets his wish and gets blown sky high. I also hope that he got his 2 minute warning. Rest in pieces George. G.C. a man who had a case of Mondays every day.