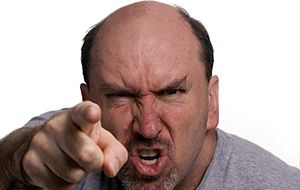 Okay, I give up trying to abolish the theory of Cases of Mondays. It is no longer a theory, it\'s now a law.

For a while I thought that it might be related to the fact that I live in the anger capital of the world - New York City, but that\'s not true. When Monday comes, a children\'s rhyme comes to mind: \"Angry Here, Angry There, Angry People Everywhere\". What? You don\'t know that rhyme? I guess you\'re not from New York.

No, it doesn\'t matter where you are, gosh, it doesn\'t even matter if you need to get back to work that day or not. It\'s got nothing to do with it. Today I was sitting in a restaurant on board of a cruise ship. Everybody here is on vacation. We\'re being served and cleaned after. Why would anybody in a world feel angry about anything that goes on in here? No idea! Yet still, Monday comes around and there\'s something in the air.

People getting mad at the hostess because they have to wait in line. Some guy is getting mad at the waiter because he didn\'t get glass of water in under a minute. People complaining because it\'s cloudy outside! Who\'s rocking their boat?

Okay, I\'m not trying to be punny. I\'m just trying to establish some sort of precedent and call for vote to eliminate Mondays completely from our weeks. That\'s right - 6 days a week, 61 weeks a year. This way, weekend comes every 4 days. Come on who\'s with me. Monday is the new no-day!