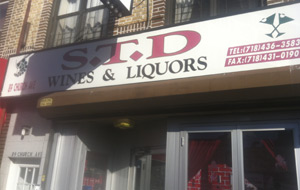 Let me point something out about today's business management. So maybe I don't have my masters in business, and maybe, as far as liquor stores are concerned, it makes no difference how you name them. I don't think that anybody would ever question what a liquor store might be named. But still, why in the world would you name your store S.T.D?

I also have spoken with a real estate company owner whose catch phrase is "Real Experts Real Estate", and he calls it RERE for short. Really? If you come up with a name at least Google it to see if it doesn't mean something stupid!

Don't get me wrong. I'm all for creativity and originality. So let's say I had a flower shop I could call it "Valentine's Day Flowers - Where every day is a Valentine's Day", but I would NEVER call it the "V.D. Flowers" for short! Common folks, think before you make long term decisions.