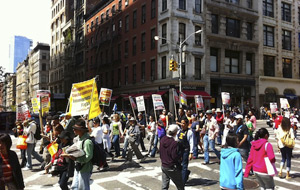 Let me point out something about a demonstration parade I bumped into in SoHo last Sunday. The main purpose of the whole spectacle was to seize deportations of illegal immigrants. There were thousands of people in a parade, which might have been a mile long. Signs screamed for acceptance and tolerance in different languages.

Colorful flags waved side to side demonstrating the pride in heritage of groups of people. But there was one flag missing. No, not the Polish flag, silly wabbit. There wasn't a single U.S. flag out there. One would think that this should represent the majority of flags in this type of demonstration, right? After all, if you are such a foreign patriot, why would you be against deportation in the first place, in fact, why leave your country in the first place?

They should at least demonstrate a little pride in country for which they are trying to fight to have a right to live in. By the way, I may sound like a republican now, but I assure you that even in a fried chicken place I always ask for my wings to be left.