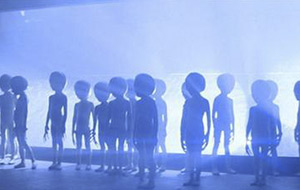 They came late at night, and didn't say a word,
Injected me with something that paralyzed my body.
Some noise came from the kitchen, I thought they would abort,
Because it was my roommate, who practices karate.

They looked at one another, unsure of what to do,
They actually seemed quite worried of being discovered.
Two other little masked guys came out of the blue,
My roommate left the building, oh no, I think it's over.

They've raised me off my bed, and carried out the room,
Four little men were stronger than I had first suspected.
I thought my end was near, I almost felt my doom,
I couldn't do a thing, that wouldn't be neglected.

I couldn't feel my body, I heard my heavy breathing,
And it's hard to control it in a place like this,
They took me to the roof, against my disbelieving,
I've spotted a round object in the nearby mist.

I must be going crazy, they weren't ski masked burglars,
They weren't little ninjas, just like the other day,
What's going on, I wondered, could this be accidental,
Or is it that those aliens do really want MY brain?

The beam of light shot downwards, just like in Spielberg's movies,
Which followed by a soundless, but strong magnetic wave.
I brain-stormed for a moment, why aliens want to do this,
I felt an upward motion, and knew I won't be saved.

My body levitated and flew through clouds of fog,
The little black masked aliens have lifted off like me.
We've reached a large steal object that seemed a mile long,
I'm being sucked by U.F.O. without a chance to flee.

They hooked me up to some machines, took readings fascinated,
I wondered what it really means, but I was still sedated.
I felt as ship has moved through skies much faster than a plane,
Where are they taking me, and why? Will anyone explain?

We passed multiple sets of stars that I have never seen,
Some planets with three moons like ours, purple, blue and green.
We finally ended up someplace, I think, in milky way,
Those creatures had the strangest ways, but peaceful in a way.

The planet weirdly bright by day, as if the sun was near,
I tried to grasp what they would say, but speech was also weird.
I finally learned to speak their tongue, and understood each one,
And this is where I now belong, third planet from the sun.