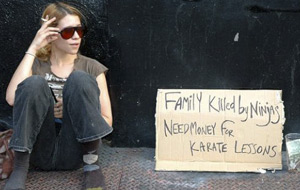 Did you notice that the homeless people have gotten a little more obnoxious lately? Maybe it's just me. Over time I offered a sandwich to a homeless guy who claimed to be hungry, but then rejected the sandwich after examining it for few seconds, and one time I gave my last dollar to a guy who claimed to be starving and later pulled out a waddle of cash tied up with rubber band to add that dollar to the rest.

Today was a pretty regular Monday, but nothing to have a case of Mondays over. And as the day was nearing its end, I was on the train going home. Just sitting there, hunched over in "The Thinker" pose, writing rhymes in my head, when a shirtless bum comes out of nowhere and appears two inches away from my face with a big dirty sign. "What is the best nation in the world?" I guess I was shocked, so I sat back straight and gave him a squinted eye look (a.k.a. Michael Scofield look). Without another word he swapped his sign to the next, which said "DONATION" and simultaneously took a cup of change from his side and shoved it again about two inches away from my face and shook it, making the change jingle.

What the what? I have a riddle for him, too... What is "donation" an anagram for? - "NA, I DO NOT!" Case of Mondays is like yawning. It's so darn contagious!